A truly global approach to world history built around significant world history stories. Worlds Together, Worlds Apart is organized around major world history stories and themes: the emergence of cities, the building of the Silk Road, the spread of major religions, the spread of the Black Death, the Age of Exploration, alternatives to nineteenth-century capitalism, the rise of modern nation-states and empires, and others. The Fourth Edition of this successful text has been streamlined, shortened, and features a new suite of tools designed to help students think critically, master content and make connections across time and place.

The most globally integrated book in its field, Worlds Together, Worlds Apart is now available in a Concise Edition. Drawing even clearer connections and comparisons across time and place, this re-imagined text and companion adaptive learning program provide a wealth of new tools that will enhance reading comprehension and develop fundamental critical thinking and history skills. 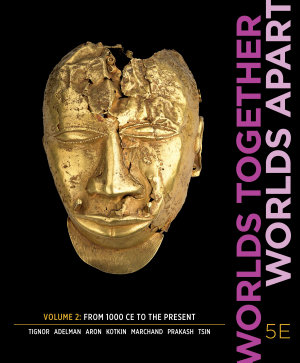 The most globally integrated book in its field, Worlds Together, Worlds Apart is unmatched in helping students draw connections and comparisons across time and place. Streamlined chapters, innovative pedagogy, and NEW scholarship, with expanded coverage of environmental history, make the Fifth Edition the most accessible and relevant yet. NEW interactive learning resources develop history skills and assess comprehension of major themes and concepts.

A streamlined and simplified global history

In this second edition, the book's non-Eurocentric approach continues with expansions of the original eleven world history "turning point" stories from the modern period to include ten more "turning point" stories from the earlier periods of world history. From the history of the world's first cities built on the great rivers of Afro-Eurasia, to the formation of the Silk Road, to the rise of nation-states, and the story of modern globalization, Worlds Together, Worlds Apart provides students with the stories that changed history and enables them to make the connections they need in order to better understand how the world came to be what it is today.

'This is the most engaging and cutting-edge survey of the world available today. Beginning with the origins of humanity up to our current times, this leading group of world historians tells the history of the world through a series of transformative stories: Out of Africa, the Axial Age, the building of the Silk Road, the rise of the world's major universalising religions, the expansion of the Mongol Empire, the Black Death, the Spread of New World Silver, the Slave Trade, the Atlantic Revolutions, Nineteenth-Century Alternative Visions, Nations and Empires, Masses and Modernity, the Three-World Order, and Contemporary Globalism. Throughout they argue that the world can best be viewed as a struggle of people's becoming more integrated as the world comes together through increased trade, warfare, and cultural exchange, while they also exhibit the strong desire for their world to stand apart and maintain its own traditional identity. Worlds Together, Worlds Apart is guaranteed to challenge conventional notions about the role of the West in our larger world history.' (Publisher)

The Second Edition of this global, comparative reader--newly edited by the co-authors of Worlds Together, Worlds Apart, Concise Edition--features added textual and visual sources directly tied to developments discussed in the Worlds Together narrative, a new casebook on "Humans and the Environment in the Second Millennium BCE," a deeply discounted package price, and a rich range of global perspectives that set this reader apart.