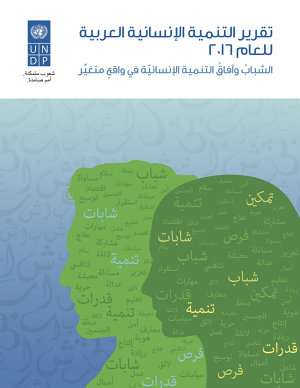 The Arab Human Development Report (AHDR) 2016 addresses the development challenges facing youth (15-29 years) in the Arab region. Historically the current youth generation is the largest youth cohort this region has had over the past 50 years, making up 30% of its population of 370 million. In light of the youth-led movements and protests during and after the 2011 uprisings, the Report argues for a renewed policy focus on youth development in the region from the perspective of human development. AHDR 2015 deals with the pillars of human development (income, education and health) with the attainment, achievement and equitable distribution of education, and with the challenges of finding stable and decent jobs. Arab youth continue to face policies of exclusion, whether political, social or economic. With protracted conflict in several Arab countries, young Arabs have become victims or perpetrators of violence, challenged by difficulties of mobility and migration. AHDR 2015 aims to engage youth in building an agenda for their future and for the future of their societies. Young Arabs have to be brought back into the centre—politically, socially, economically—by giving them a stake in their future.