The FIDIC (Fdration Internationale Des Ingnieurs-Conseils / International Federation of Consulting Engineers) Forms of Contract are used to provide a recognizable common basis of agreement where the project and the principal contract are international, and consist of a suite of contracts. The FIDIC Contracts: Law and Practice covers the full range of FIDIC contracts, providing legal commentary, detailed clause-by-clause analysis, and relevant case law for each of the different forms. The book provides a comprehensive reference for those using the FIDIC forms on contract in international construction and engineering projects. Containing a good blend of practitioner and academic opinion, it highlights controversial issues and outlines the main schools of thought. It is suitable for lawyers practicing in international procurement and dispute resolution. It will also be of benefit to engineers, project managers, quantity surveyors, architects, contractors, and others. 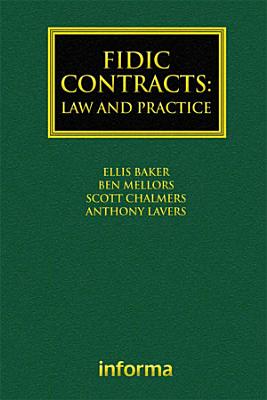 FIDIC Contracts: Law and Practice is sure to become the leading industry standard guide to using the FIDIC forms, and is the only book to date which deals with the whole suites of contracts, including the new gold book for Design, Build and Operate projects. The White & Case work is outstanding in its detailed consideration and treatment of the legal aspects of the interpretation and application of the Conditions, touching on many points that most people would not have encountered. Humphrey LLoyd, International Construction Law Review [2010] ICLR 386 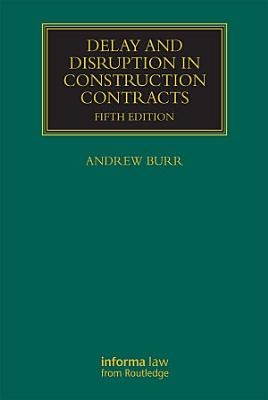 Delay and disruption in the course of construction impacts upon building projects of any scale. Now in its 5th edition Delay and Disruption in Construction Contracts continues to be the pre-eminent guide to these often complex and potentially costly issues and has been cited by the judiciary as a leading textbook in court decisions worldwide, see, for example, Mirant v Ove Arup [2007] EWHC 918 (TCC) at [122] to [135] per the late His Honour Judge Toulmin CMG QC. Whilst covering the manner in which delay and disruption should be considered at each stage of a construction project, from inception to completion and beyond, this book includes: An international team of specialist advisory editors, namely Francis Barber (insurance), Steve Briggs (time), Wolfgang Breyer (civil law), Joe Castellano (North America), David-John Gibbs (BIM), Wendy MacLaughlin (Pacific Rim), Chris Miers (dispute boards), Rob Palles-Clark (money), and Keith Pickavance Comparative analysis of the law in this field in Australia, Canada, England and Wales, Hong Kong, Ireland, New Zealand, the United States and in civil law jurisdictions Commentary upon, and comparison of, standard forms from Australia, Ireland, New Zealand, the United Kingdom, USA and elsewhere, including two major new forms New chapters on adjudication, dispute boards and the civil law dynamic Extensive coverage of Building Information Modelling New appendices on the SCL Protocol (Julian Bailey) and the choice of delay analysis methodologies (Nuhu Braimah) Updated case law (to December 2014), linked directly to the principles explained in the text, with over 100 helpful "Illustrations" Bespoke diagrams, which are available for digital download and aid explanation of multi-faceted issues This book addresses delay and disruption in a manner which is practical, useful and academically rigorous. As such, it remains an essential reference for any lawyer, dispute resolver, project manager, architect, engineer, contractor, or academic involved in the construction industry.

Construction Law provides the reader with a comprehensive guide to the complex world of construction contracts, litigation, planning and environmental law, Public and EU law, statutes, safety and building regulations - all of which are thoughtfully and comprehensively explained in a clear, concise tone that is suitable for both the student and professional reader. Includes key coverage of FIDIC, NECC, JCT and ICE forms 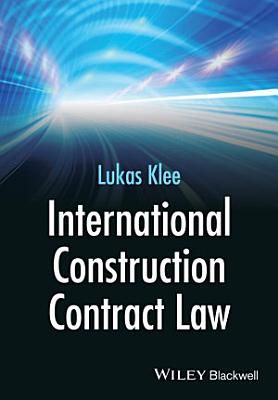 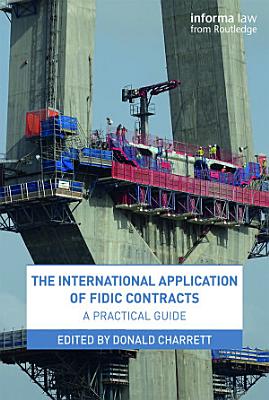 FIDIC contracts are the most widely used contracts for international construction around the world and are used in many different jurisdictions, both common law and civil law. For any construction project, the General Conditions of Contract published by FIDIC need to be supplemented by Particular Conditions that specify the specific requirements of that project. The International Application of FIDIC Contracts: A Practical Guide provides readers with detailed guidance and resources for the preparation of the Particular Conditions that will comply with the requirements of the applicable laws that apply to the site where the work is carried out, and for the governing law of the contract, for a number of the jurisdictions in which FIDIC contracts are used. This book is essential reading for construction professionals, lawyers and students of construction law.

Construction drafting is a central part of commercial property transactions, raising complex issues of law, interpretation and procedure. The key to addressing these issues lies in having rapid access to draft forms of agreement and specialist expertise based on a sound understanding of industry practice, case-law and current legislation.Manual of Construction Agreements is a complete guide to all aspects of the relevant law and practice. Richard Cockram, one of the country's leading construction lawyers, provides detailed and authoritative commentary and a review of all standard form agreements relevant to the UK construction market. In addition there is an exhaustive suite of over 100 expertly drafted forms and precedents, together with comprehensive annotations.It is regularly updated to cover relevant developments in construction law and practice, and is fully up-to-date with the recent amendments to the Housing Grants, Construction and Regeneration Act 1996, effected by the Local Democracy, Economic Development and Construction Act 2009.The CD-ROM contains fillable Word documents of forms and precedents for use in connection with building and civil engineering contracts, particularly in cases incorporating the JCT 2011 or ICE or NEC standard forms, and the related appointment of consultants and ancillary documentation. 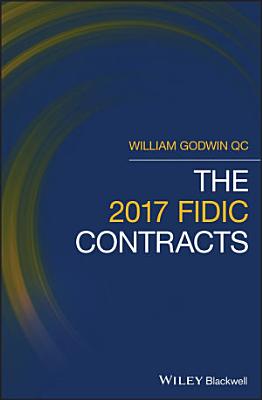 Provides a clear and comprehensive guide to the 2017 FIDIC contracts—written by a member of the FIDIC Updates Task Group FIDIC contracts are the most widely used engineering standard form contracts internationally but until 2017 the three main forms (the Red, Yellow and Silver Books) had not been amended or updated for nearly two decades, since the first editions were published in 1999. Written by a specialist lawyer who was member of the FIDIC Updates Task Group responsible for writing the new contracts, this book examines in detail the many substantial changes they have introduced. After providing an overview the contracts are examined clause by clause with the aim of showing how each compares and contrasts with the others and how the second editions compare and contrast with the first. The first chapter describes how the Red, Yellow and Silver Books evolved from earlier contract forms and the distinctive characteristics of each, before providing an overview of the updates, including new potential risks for both Employer and Contractor, and then examining, in the second chapter, key general provisions such as the new rules on notices and limitation of liability. Chapter 3 examines the enhanced role of the Engineer in the Red and Yellow Books/Employer’s Representative’s function in the Silver including the new procedure for determinations as well as the Employer’s obligations and contract administration. The Contractor’s obligations are considered in chapter 4 while chapter 5 examines his responsibility for design in the Yellow and Silver Books. Chapters 6 to 14 deal respectively with plant, materials and workmanship and staff and labour; time-related provisions in the three contracts including extensions of time, and the Employer’s right to suspend the works; testing on and after completion and the Employer’s taking over of the works; defects after taking over, acceptance of the works and unfulfilled obligations; measurement (in the Red Book), the Contract Price and payment; the new variations regime and adjustments to the Price; termination and suspension; care of the works and indemnities and Exceptional Events (previously, Force Majeure). An important feature of the new contracts is their increased emphasis on clarity in the claims process and on dispute avoidance. These topics are examined in the final two chapters, 15 and 16, which deal respectively with the new claims and dispute resolution provisions of the 2017 forms. FIDIC contracts are the most widely used standard forms of contract for international engineering and construction projects Provides a clear and comprehensive guide to the 2017 FIDIC Red, Yellow and Silver Books Written by a senior specialist lawyer and member of the FIDIC 2017 Updates Task Group responsible for writing the new contracts Accessible to those with little or no familiarity with FIDIC contracts The 2017 FIDIC Contracts is an important guide for anyone engaged in international projects, including employers, contractors, engineers, lawyers, suppliers and project financiers/sponsors. 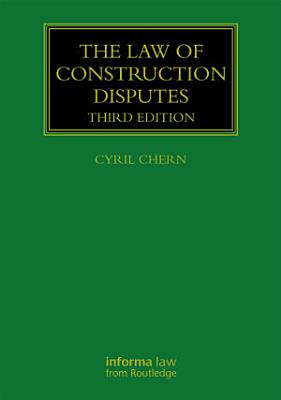 Now in a fully updated third edition, The Law of Construction Disputes is a leading source of authoritative and detailed information on the whole area of construction law including contracts and their performance, third parties, pursuing claims and dispute resolution. It covers the construction dispute process by analysing the main areas from which disputes arise, up to date case law, and how to effectively deal with construction project disputes once they have arisen. Now including references to the new FIDIC contracts, which were released in 2017, this edition expands on advanced practitioner issues, as well as the emerging law of construction disputes on an international basis and gives the practitioner all the case law needed in one concise volume. The book examines the methods and methodology of construction law, not only for a common law context, but also under other legal systems. Readers will be guided through the various international contract formats governing construction, alongside applicable case law. Additionally, they will be shown the correct contract provisions and forms used to prevent disputes from escalating in order to reach successful conclusions without litigation. Including expert advice and many relevant reference materials, this book is an extremely helpful guide to legal practitioners and construction professionals. 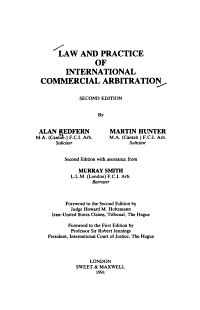 This volume provides a detailed review of the process of international commercial arbitration, from the drafting of the arbitration agreement to the enforcement of the arbitral tribunal's award. It has been revised to include appendices which describe the arbitration rules of various countries. 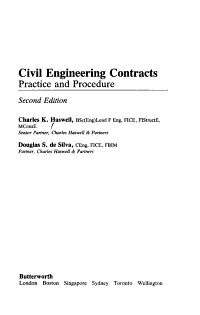 Different contract procedures adopted on civil engineering projects are studied in this revised edition, taking into account the new developments. The new coverage includes comments on various related books and new forms of contract that have been published. 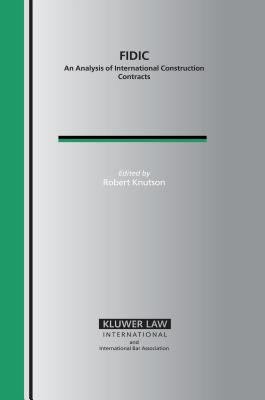 In this unique guide to the suite of contracts published by FIDIC (The International Federation of Consulting Engineers) - the contract forms most widely used for international construction undertakings - twenty-two outstanding authorities in construction law from a wide variety of countries, describe relevant likely pitfalls (and special opportunities) for foreign lawyers in each of their jurisdictions. This very useful book will be extremely welcome to in-house counsel who must evaluate the legal disposition of a proposed or pending construction contract subject to the laws of a foreign jurisdiction. It will continue to be of service as long as the project proceeds and beyond, particularly for the optimal resolution of disputes. 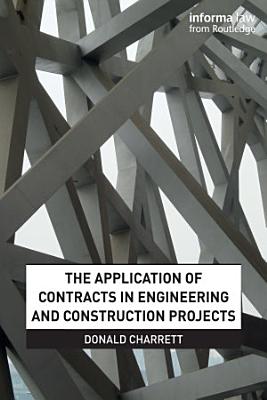 Written by an engineer and construction lawyer with many years of experience, The Application of Contracts in Engineering and Construction Projects provides unique and invaluable guidance on the role of contracts in construction and engineering projects. Compiling papers written and edited by the author, it draws together a lifetime of lessons learned in these fields and covers the topics a practicing professional might encounter in such a project, developed in bite-sized chunks. Key topics included are: the engineer and the contract; the project and the contract; avoidance and resolution of disputes; forensic engineers and expert witnesses; and international construction contracts. The inclusion of numerous case studies to illustrate the importance of getting the contract right before it is entered into, and the consequences that may ensue if this is not done, makes The Application of Contracts in Engineering and Construction Projects essential reading for construction professionals, lawyers and students of construction law.