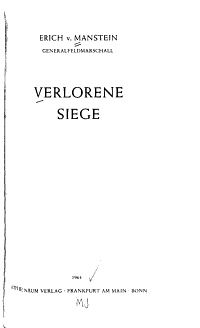 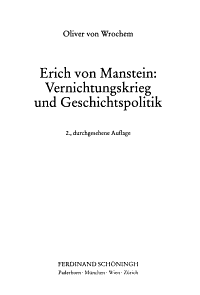 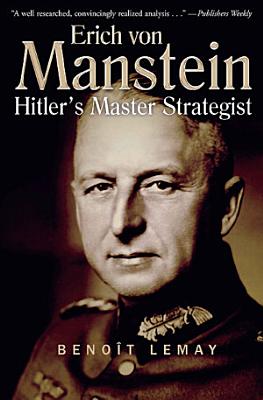 A selection of the Military Book Club: An “informative and objective” biography of a genius commander and a study of his loyalty to the Nazi cause (Library Journal). To many close students of World War II, Erich von Manstein is considered the greatest commander of the war, if not the entire twentieth century. He devised the plan that conquered France in 1940 and led an infantry corps in that campaign. At the head of a panzer corps, he reached the gates of Leningrad in 1941, then took command of 11th Army and conquered Sevastopol and the Crimea. After destroying another Soviet army in the north, he was given command of the ad hoc Army Group Don to retrieve the German calamity at Stalingrad, whereupon he launched a counteroffensive that, against all odds, restored the German front. Afterward, he commanded Army Group South, nearly crushing the Soviets at Kursk, and then skillfully resisted their relentless attacks as he traded territory for coherence in the East. Though an undoubtedly brilliant military leader—whose achievements, considering the forces at his disposal, rivaled of Patton, Rommel, MacArthur, and Montgomery—surprisingly little is known about Manstein himself, save for his own memoir and the accolades of his contemporaries. In this book, we finally have a full portrait of the man, including his campaigns, and an analysis of what precisely kept a genius like Manstein harnessed to such a dark cause. A great military figure, but a man who lacked a sharp political sense, Manstein was very much representative of the Germano-Prussian military caste of his time. Though Hitler was uneasy about the influence he’d gained throughout the German Army, Manstein ultimately declined to join any clandestine plots against his Führer, believing they would simply cause chaos, the one thing he abhorred. Though he constantly opposed Hitler on operational details, he considered it a point of loyalty to simply stand with the German state, in whatever form. Though not bereft of personal opinions, his primary allegiances were, first, to Deutschland and, second, to the soldiers under his command, who’d been committed against an enemy many times their strength. It is thus through Manstein that the attitudes of other high-ranking officers who fought during the Second World War, particularly on the Eastern Front, can be illuminated. This book is a “well-researched, convincingly reasoned analysis of a general widely considered one of WWII’s great commanders” (Publishers Weekly). Includes photographs. 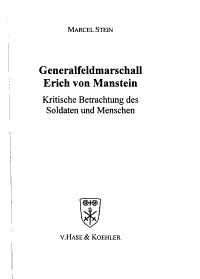 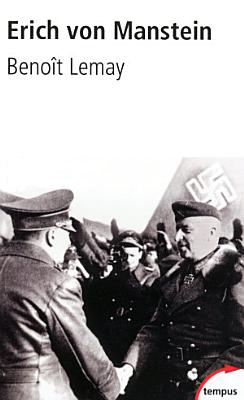 Erich von Manstein was one of the most successful German commanders of World War II. His military mind proved outstanding in many a conflict but perhaps his greatest triumph was his ingenious operational plan that led to the rapid defeat of France in May 1940. Manstein also showed great skill under adversity by commanding a furious rebuff to the Soviet armies in 1943, whilst Germany were retreating. However, his skill could not reverse Germany's declining fortunes and Manstein's frequent disagreement's with Hitler over military strategy led to his dismissal. Robert Forczyk tells the story of one of Germany's most valuable military talents, from his early years to his post- war conviction and his later career.