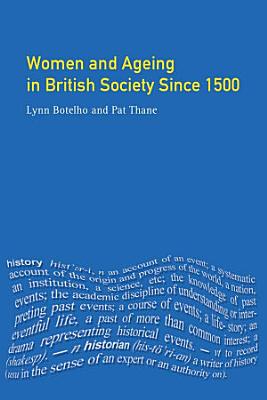 Women have always made up the majority of older people: this examination of the lives of elderly women in Britain in the period 1500 to the present reveals attitudes towards the ageing process. It sheds light on household structures as well as wider issues - including the history of the family, the process of industrialisation, the poor law, and welfare provision - and questions many common beliefs about elderly women, particularly that female old age was a time of poverty and want. An important book for students of history and sociology alike. 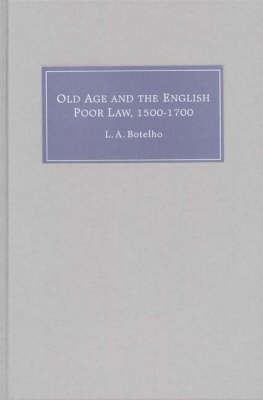 Based on documents from two Suffolk villages, this study examines the operation of the poor law and the individual effort the elderly poor needed to make to survive. 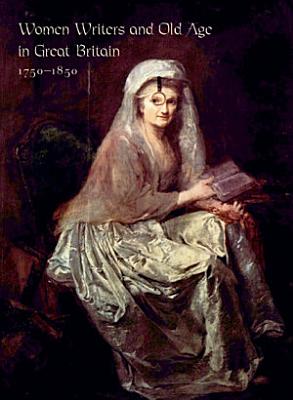 This groundbreaking study explores the later lives and late-life writings of more than two dozen British women authors active during the long eighteenth century. Drawing on biographical materials, literary texts, and reception histories, Devoney Looser finds that far from fading into moribund old age, female literary greats such as Anna Letitia Barbauld, Frances Burney, Maria Edgeworth, Catharine Macaulay, Hester Lynch Piozzi, and Jane Porter toiled for decades after they achieved acclaim -- despite seemingly concerted attempts by literary gatekeepers to marginalize their later contributions. Though these remarkable women wrote and published well into old age, Looser sees in their late careers the necessity of choosing among several different paths. These included receding into the background as authors of "classics," adapting to grandmotherly standards of behavior, attempting to reshape masculinized conceptions of aged wisdom, or trying to create entirely new categories for older women writers. In assessing how these writers affected and were affected by the culture in which they lived, and in examining their varied reactions to the prospect of aging, Looser constructs careful portraits of each of her Subjects and explains why many turned toward retrospection in their later works. In illuminating the powerful and often poorly recognized legacy of the British women writers who spurred a marketplace revolution in their earlier years only to find unanticipated barriers to acceptance in later life, Looser opens up new scholarly territory in the burgeoning field of feminist age studies. 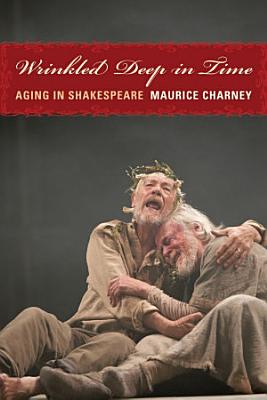 Shakespeare was acutely aware of our intimate struggles with aging. His dramatic characters either prosper or suffer according to their relationship with maturity, and his sonnets eloquently explore time's ravaging effects. "Wrinkled deep in time" is how the queen describes herself in Antony and Cleopatra, and at the end of King Lear, there is a tragic sense that both the king and Gloucester have acquired a wisdom they otherwise lacked at the beginning of the play. Even Juliet matures considerably before she drinks Friar Lawrence's potion, and Macbeth and his wife prematurely grow old from their murderous schemes. Drawing on historical documents and the dramatist's own complex depictions, Maurice Charney conducts an original investigation into patterns of aging in Shakespeare, exploring the fulfillment or distress of Shakespeare's characters in combination with their mental and physical decline. Comparing the characterizations of elderly kings and queens, older lovers, patriarchal men, matriarchal women, and the senex the stereotypical old man of Roman comedy with the history of life expectancy in Shakespeare's England, Charney uncovers similarities and differences between our contemporary attitudes toward aging and aging as it was understood more than four hundred years ago. From this dynamic examination, a new perspective on Shakespeare emerges, one that celebrates and deepens our knowledge of his subtler themes and characters. 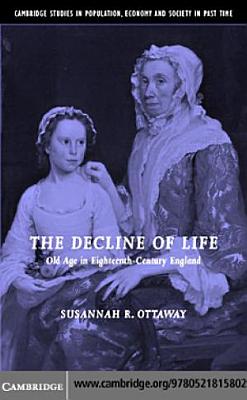 The Decline of Life is an ambitious and absorbing study of old age in eighteenth-century England. Drawing on a wealth of sources - literature, correspondence, poor house and workhouse documents and diaries - Susannah Ottaway considers a wide range of experiences and expectations of age in the period, and demonstrates that the central concern of ageing individuals was to continue to live as independently as possible into their last days. Ageing men and women stayed closely connected to their families and communities, in relationships characterized by mutual support and reciprocal obligations. Despite these aspects of continuity, however, older individuals' ability to maintain their autonomy, and the nature of the support available to them once they did fall into necessity declined significantly in the last decades of the century. As a result, old age was increasingly marginalized. Historical demographers, historical gerontologists, sociologists, social historians and women's historians will find this book essential reading. 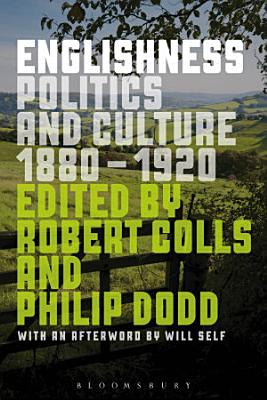 'Englishness' is by no means the unchanging quality of those living in the territory that has come to be England, but a concept that has been made and remade throughout history, expressing itself through existing symbols and ideas. Since its first publication in 1987 this collection has been regarded as a major work on English national identity as it evolved during the period 1880-1920 and has had a significant impact on writing and research. It is a classic text for students of modern British history and courses in politics, sociology and literature. This updated edition of Englishness contains a new introduction by Robert Colls and Philip Dodd, which sets the work in the context of research done since its original publication, and an afterword by Will Self which relates it to current debates on Britain as a multinational state. This important collection contains ideas that are still pertinent today, making it essential reading for students and scholars alike. 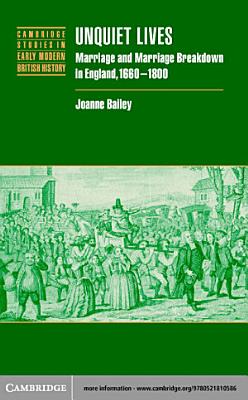 Based on vivid court records and newspaper advertisements, this 2003 book is a pioneering account of the expectations and experiences of married life among the middle and labouring ranks in the long eighteenth century. Its original methodology draws attention to the material life of marriage, which has long been dominated by theories of emotional shifts or fashionable accounts of spouses' gendered, oppositional lives. Thus it challenges preconceptions about authority in the household, by showing the extent to which husbands depended upon their wives' vital economic activities: household management and child care. Not only did this forge co-dependency between spouses, it undermined men's autonomy. The power balance within marriage is further revised by evidence that the sexual double standard was not rigidly applied in everyday life. The book also shows that ideas about adultery and domestic violence evolved in the eighteenth century, influenced by new models of masculinity and femininity. 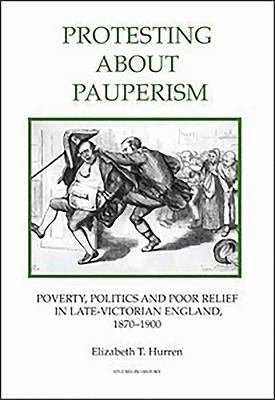 The consequences of extreme poverty were a grim reality for all too many people in Victorian England. The various poor laws implemented to try to deal with it contained a number of controversial measures, one of the most radical and unpopular being the crusade against outdoor relief, during which central government sought to halt all welfare payments at home. Via a close case study of Brixworth union in Northamptonshire, which offers an unusually rich corpus of primary material and evidence, the author looks at what happened to those impoverished men and women who struggled to live independently in a world-without-welfare outside the workhouse. She retraces the experiences of elderly paupers evicted from almshouses, of the children of the aged poor prosecuted for parental maintenance, of dying paupers who were refused medical care in their homes, and of women begging for funeral costs in as attempt to prevent the bodies of their loved ones being taken for dissection by anatomists. She then shows how increasing democratisation gave the labouring poor the means to win control of the poor law. ELIZABETH T. HURREN is Senior Lecturer in the History of Medicine, Oxford Brookes University, Centre for Health, Medicine and Society, Past and Present. 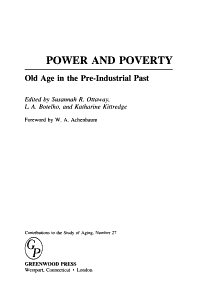 Brings to light exciting new research on the history of old age demonstrating many ways in which advanced age was associated with authority in the pre-industrial past, challenging existing literature's focus on the dependence and disability of older people who lived in the period. 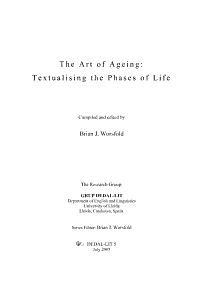 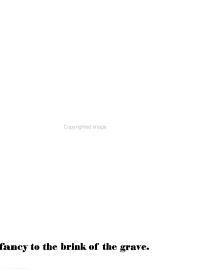 Seven contributors examine how the best thinkers and artists of each historical epoch in the West have treated old age. Full of surprising and fascinating facts, this is an uplifting companion for those who, like it or not, are beginning to understand the inevitability of their own aging process. 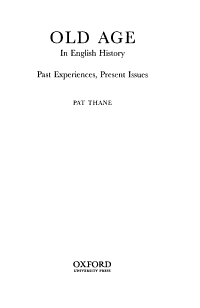 At the end of the twentieth century more people are living into their seventies, eighties, nineties and beyond, a process expected to continue well into the next millennium. The twentieth century has achieved what people in other centuries only dreamed of: many can now expect to survive to old age in reasonably good health and can remain active and independent to the end, in contrast to the high death rate, ill health and destitution which affected all ages in the past. Yet this change is generally greeted not with triumph but with alarm. It is assumed that the longer people live, the longer they are ill and dependent, thus burdening a shrinking younger generation with the cost of pensions and health care. It is also widely believed that 'the past' saw few survivors into old age and these could be supported by their families without involving the taxpayer. In this first survey of old age throughout English history, these assumptions are challenged. Vivid pictures aregiven of the ways in which very large numbers of older people lived often vigorous and independent lives over many centuries. The book argues that old people have always been highly visible in English communities, and concludes that as people live longer due to the benefits of the rise in living standards, far from being 'burdens' they can be valuable contributors to their family and friends. 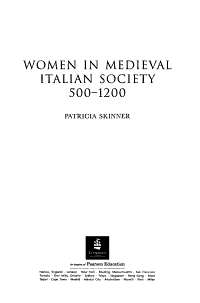 In this first book to explore women's lives in medieval Italy from the sixth to the thirteenth centuries, Patricia Skinner outlines the development of women's history in Italy before exploring medieval sources for their lives. She conveys the rich variety of women's lives and experiences through new readings of the source material and newly-translated excerpts. The book is arranged chronologically, and each chapter includes a brief political overview together with a focus on key female figures in Italian history, mainly rulers, who have been neglected by surveys of medieval European women. In contrast to many treatments, the book includes substantial comparisons between the northern and southern halves of the peninsula. It also challenges some of the standard historiography on medieval Italy by demonstrating that women often did not benefit from the so-called advances in Italian political and social structures. 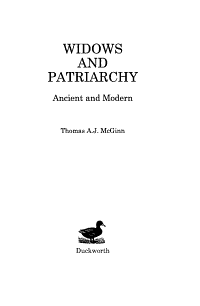 Begins with the view that ancient society was structured by a 'spectrum of statuses' and applies this insight to the position of women, primarily that of widows, in three historical periods. This book analyses the evidence to assess the value of this generalization and, to evaluate the position of widows in the societies under examination.