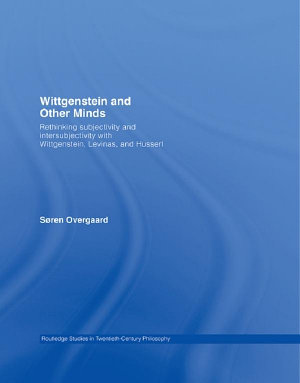 A compelling new approach to the problem that has haunted twentieth century philosophy in both its analytical and continental shapes. No other book addresses as thoroughly the parallels between Wittgenstein and leading Continental philosophers such as Levinas, Husserl, and Heidegger. 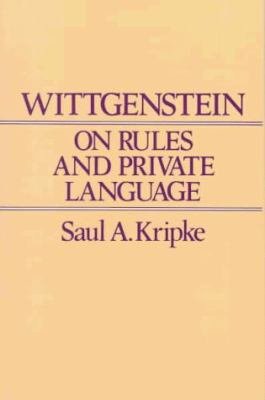 In this book Saul Kripke brings his powerful philosophical intelligence to bear on Wittgenstein's analysis of the notion of following a rule. 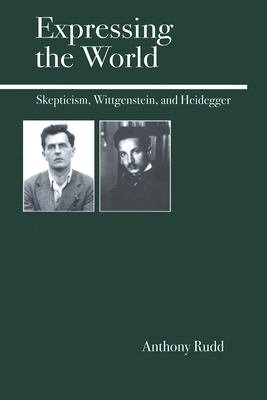 In this book, Anthony Rudd flouts convention in his approach to the problem of skepticism. He brings Wittgensteinian and analytic philosophy into dialogue with Heidegger's work and the continental tradition, schools of thought that are normally considered antipathetic to one another. Drawing heavily on some often neglected aspects of Wittgenstein and Heidegger, Professor Rudd argues that so long as we consider our knowledge of external realities to be a purely intellectual matter, skepticism will remain irrefutable. Genuine knowledge can be established, though, if we understand it as essentially tied to patterns of practical activity and our emotional lives. 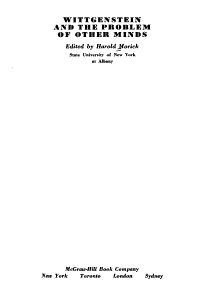 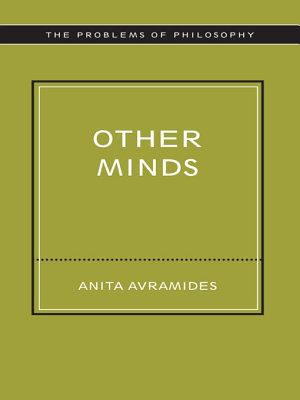 How do we know whether there are other minds besides our own? The problem of other minds raises many questions which are at the root of all philosophical investigations - how it is we know, what is the mind and can we be certain about any of our beliefs? In this compelling analysis of 'other minds' Anita Avramides traces the question from the Ancient Sceptics through to Descartes, Malebranche, Locke, Berkeley, Reid and Wittgenstein. The second part of the book explores the views of influential contemporary philosophers such as Strawson, Davidson, Nagel and Searle. Other Minds provides a clear insightful introduction to one of the most important problems in philosophy. It will prove invaluable to all students of philosophy. 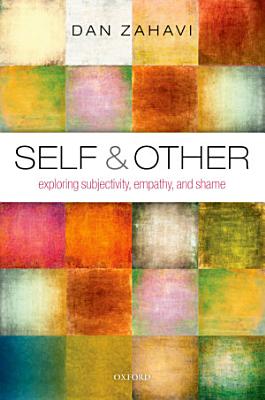 Can you be a self on your own or only together with others? Is selfhood a built-in feature of experience or rather socially constructed? How do we at all come to understand others? Does empathy amount to and allow for a distinct experiential acquaintance with others, and if so, what does that tell us about the nature of selfhood and social cognition? Does a strong emphasis on the first-personal character of consciousness prohibit a satisfactory account of intersubjectivity or is the former rather a necessary requirement for the latter? Engaging with debates and findings in classical phenomenology, in philosophy of mind and in various empirical disciplines, Dan Zahavi's new book Self and Other offers answers to these questions. Discussing such diverse topics as self-consciousness, phenomenal externalism, mindless coping, mirror self-recognition, autism, theory of mind, embodied simulation, joint attention, shame, time-consciousness, embodiment, narrativity, self-disorders, expressivity and Buddhist no-self accounts, Zahavi argues that any theory of consciousness that wishes to take the subjective dimension of our experiential life serious must endorse a minimalist notion of self. At the same time, however, he also contends that an adequate account of the self has to recognize its multifaceted character, and that various complementary accounts must be integrated, if we are to do justice to its complexity. Thus, while arguing that the most fundamental level of selfhood is not socially constructed and not constitutively dependent upon others, Zahavi also acknowledges that there are dimensions of the self and types of self-experience that are other-mediated. The final part of the book exemplifies this claim through a close analysis of shame. 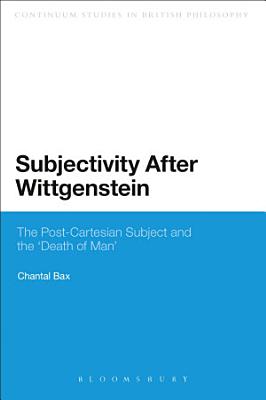 Although Wittgenstein is often held co-responsible for the so-called death of man as it was pronounced in the course of the previous century, no detailed description of his alternative to the traditional or Cartesian account of human being has so far been available. By consulting several parts of Wittgenstein's later oeuvre, Subjectivity after Wittgenstein aims to fill this gap. However, it also contributes to the debate about the Cartesian subject and its demise by discussing the criticism that the rethinking of subjectivity received, for it has been argued that the anti-Cartesian turn in continental philosophy has lead to a loss of a centre for both ethics and politics. By further exploring the implications of the Wittgensteinian account of human being, this book makes it clear that a non-Cartesian view on the subject is not necessarily ethically and politically inert. Moreover, it argues that ethical and political arguments should not automatically take precedence in a debate about the nature of man. 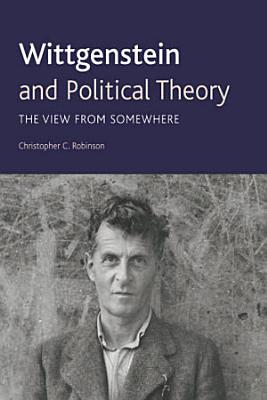 This book, newly available in paperback, relates Wittgenstein's philosophy to a range of problems and trends in contemporary political theory. 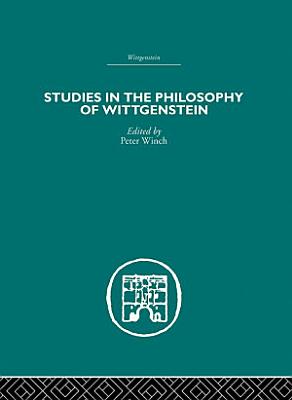 First published in 2005. Routledge is an imprint of Taylor & Francis, an informa company. 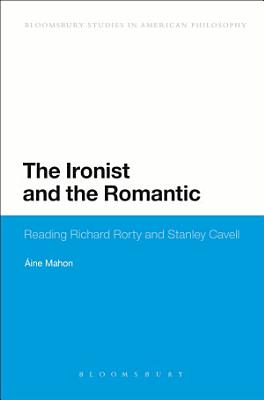 At the time of his death in 2007, Richard Rorty was widely acclaimed as one of the world's most influential contemporary thinkers. Stanley Cavell, who has been a leading intellectual figure from the 1960s to the present, has been just as philosophically influential as Rorty though perhaps not as politically divisive. Both philosophers have developed from analytic to post-analytical thought, both move between philosophy, literature and cultural politics, and both re-establish American philosophical traditions in a new and nuanced key. The Ironist and the Romantic: Reading Richard Rorty and Stanley Cavell finds the sound of Rorty's cheerful pragmatism strikingly at odds with the anxious romanticism of Cavell. Beginning from this tonal discord, and moving through comprehensive comparative analysis on the topics of scepticism, American philosophy, literature, writing style and politics, this book presents the work of its central figures in a novel and mutually illuminating perspective. Áine Mahon's unique and original comparative reading will be of interest not only to those working on Rorty and Cavell but to anyone concerned with the current state of American philosophy. 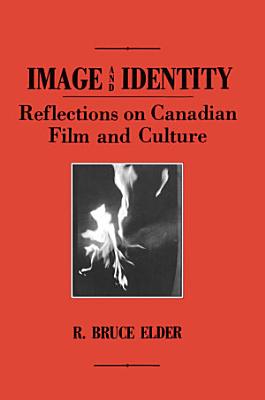 What do images of the body, which recent poets and filmmakers have given us, tell us about ourselves, about the way we think and about the culture in which we live? In his new book A Body of Vision, R. Bruce Elder situates contemporary poetic and cinematic body images in their cultural context. Elder examines how recent artists have tried to recognize and to convey primordial forms of experiences. He proposes the daring thesis that in their efforts to do so, artists have resorted to gnostic models of consciousness. He argues that the attempt to convey these primordial modes of awareness demands a different conception of artistic meaning from any of those that currently dominate contemporary critical discussion. By reworking theories and speech in highly original ways, Elder formulates this new conception. The works of Brakhage, Artaud, Schneeman, Cohen and others lie naked under Elder’s razor-sharp dissecting knife and he exposes the essence of their work, cutting deeply into the themes and theses from which the works are derived. His remarks on the gaps in contemporary critical practices will likely become the focus of much debate. 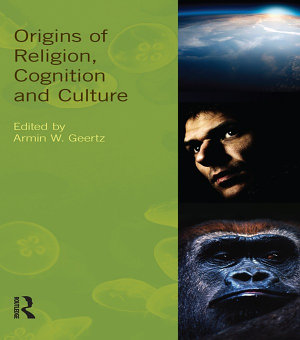 Attempts to understand the origins of humanity have raised fundamental questions about the complex relationship between cognition and culture. Central to the debates on origins is the role of religion, religious ritual and religious experience. What came first: individual religious (ecstatic) experiences, collective observances of transition situations, fear of death, ritual competence, magical coercion; mirror neurons or temporal lobe religiosity? Cognitive scientists are now providing us with important insights on phylogenetic and ontogenetic processes. Together with insights from the humanities and social sciences on the origins, development and maintenance of complex semiotic, social and cultural systems, a general picture of what is particularly human about humans could emerge. Reflections on the preconditions for symbolic and linguistic competence and practice are now within our grasp. Origins of Religion, Cognition and Culture puts culture centre stage in the cognitive science of religion. 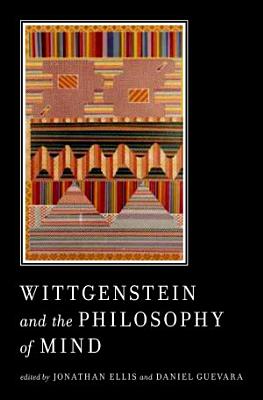 Based on a conference held in June 2007 at the University of California Santa Cruz. 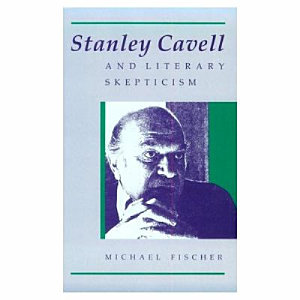 Stanley Cavell's work is distinctive not only in its importance to philosophy but also for its remarkable interdisciplinary range. Cavell is read avidly by students of film, photography, painting, and music, but especially by students of literature, for whom Cavell offers major readings of Thoreau, Emerson, Shakespeare, and others. In this first book-length study of Cavell's writings, Michael Fischer examines Cavell's relevance to the controversies surrounding poststructuralist literary theory, particularly works by Jacques Derrida, J. Hillis Miller, Paul de Man, and Stanley Fish. Throughout his study, Fischer focuses on skepticism, a central concern of Cavell's multifaceted work. Cavell, following J. L. Austin and Wittgenstein, does not refute the radical epistemological questioning of Descartes, Hume, and others, but rather characterizes skepticism as a significant human possibility or temptation. As presented by Fischer, Cavell's accounts of both external-world and other-minds skepticism share significant affinities with deconstruction, a connection overlooked by contemporary literary theorists. Fischer follows Cavell's lead in examining how different genres address the problems raised by skepticism and goes on to show how Cavell draws on American and English romanticism in fashioning a response to it. He concludes by analyzing Cavell's remarks about current critical theory, focusing on Cavell's uneasiness with some of the conclusions reached by its practitioners. Fischer shows that Cavell's insights, grounded in powerful analyses of Descartes, Hume, and Wittgenstein, permit a fresh view of Derrida, Miller, de Man, and Fish. The result is not only a revealing characterization of deconstruction but a much-needed and insightful introduction to Cavell's rich but difficult oeuvre.