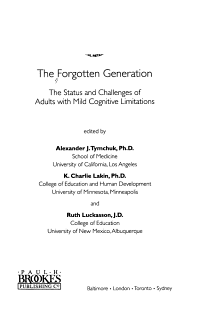 What happens when men and women with mild cognitive limitations--perhaps having received special education in school--are expected to manage in adulthood with few or no specialized supports? Revisiting the important ground covered in the report published more than 25 years ago by the President's Committee on Mental Retardation (PCMR), this much-needed book examines what life is like for adults with mild cognitive limitations. The authors explore the challenge this population faces in every aspect of life, including - housing - community living - citizenship - civil and legal rights - employment - health - family - emotional well-being You'll get insight into how critical service delivery is to the transition to adulthood and independence of individuals with mild mental retardation. You'll also get recommendations for supports (financial, medical, and emotional) so you can prevent individuals from falling through the cracks in community service systems. A wake-up call for everyone who works with this too-often overlooked group--order your copy today!

The 'silver tsunami' is a feature of most countries. With low fertility rates and the ageing of post war baby boomers, the proportion of people living in advanced age is expected to increase. This raises a number of concerns from a public health perspective, one of which is the persistence of socioeconomic inequalities in old age. While traditional indicators of socioeconomic position (education, occupation, and income) may accurately reflect the socioeconomic position of the working age population (15-64), the applicability of these indicators decreases with age. When measuring the socioeconomic position of older adults, a number of theoretical and methodological issues must be considered. The main objective of this thesis is to create a valid measure of SEP which distinguishes between 'advantaged' and 'disadvantaged' groups in the ≥65 population. This study uses de-identified individual level data from the 2013 New Zealand census accessed within the Integrated Data Infrastructure to measure the socioeconomic position of older people. This thesis uses a conceptual framework, with house tenure acting as a 'lifetime measure' of SEP, a measure was created which divides the ≥65 population (excluding those in non-private dwellings) into low, medium and high SEP. The overall distribution consisted of 20% of people in low SEP; 59% in medium SEP and 22% in high SEP. Europeans showed the greatest advantage with the largest percentage of people in high SEP (24%) while Māori (42%) and Pacific (57%) populations had an overwhelming concentration of elderly in low SEP. To our knowledge, this is the first study in New Zealand to use whole population census data to create a measure of SEP, reflective of the changing circumstances of older people. This study will contribute to better and more refined measurement of socioeconomic circumstance in older people, allowing for the differentiation and identification of those in high and low SEP groups. This thesis sheds light on the growing inequality, particularly among our Māori and Pacific elders in New Zealand. 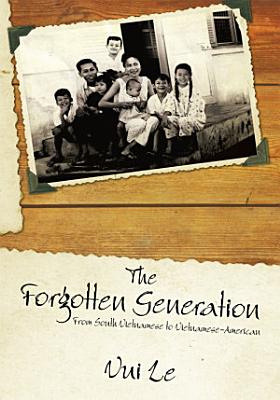 In the memoir The Forgotten Generation, Vui Le chronicles the life-changing experiences of the Vietnamese expatriates who fought valiantly for South Vietnam, risked their lives in search of freedom after the fall of Saigon, and made sacrifices for the future of their children during the aftermath of the war. In 1975, Vietnam was a country of no consequence. While studying to be a Catholic priest, Vui Le is called out of the seminary by his mother after the Communists overrun Qu ng Tr , the town where his father was stationed. Because she had not heard from his father in several weeks, she summons Vui Le to help plan his father's funeral. It is this event that begins an uncertain future for a young Le and later motivates him to share this poignant narration of his family's escape from the fall of Saigon and their journey to a new life in America. In his vivid account of how his family survived difficult and uncertain circumstances through sheer will and determination, Le also highlights the courageous and heroic acts of the South Vietnamese people their struggles, sacrifices, and eventual victories shedding light on a forgotten generation that deserves to be remembered. 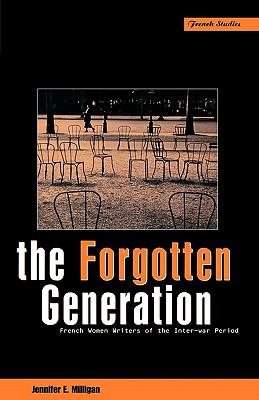 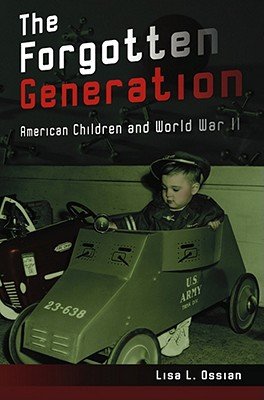 Explores the effect of the challenges of World War II on American children and teenagers.

The purpose of this study was to analyze members of the Generation X cohort intentions to utilize Social Media sites for fashion consumption. An adaption of the Technology Acceptance Model (TAM) for Social Media was used to measure perceived ease of use (EU), perceived usefulness (PU), perceived playfulness (PP), social media capabilities (CP), critical mass (CM), trustworthiness (TW), intention to use (IU), and actual use (AU). Women ages 41-52 were asked to participate in the study through Amazon Mechanical Turk (MTurk). A total of 208 participants completed the survey and 178 usable responses were analyzed in SPSS. Multiple regressions were performed to test the relationship between EU, CM, CP, PP and PU; the relationship between PU, TW and IU; and the relationship between IU and AU. The findings yielded significant implications for the fashion industry and consumer behavior research based on Generation X. 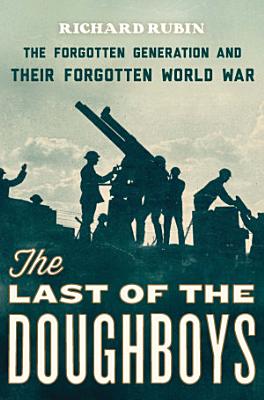 Collected over ten years, presents interviews with the last remaining World War I veterans, aged 101 to 113, to paint a picture of a time and a generation that, despite memorials and history lessons, is quickly fading away. 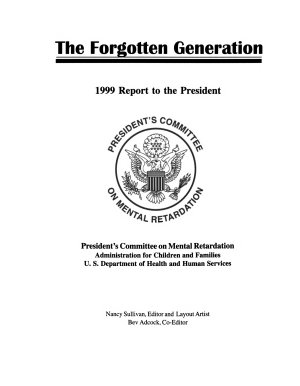 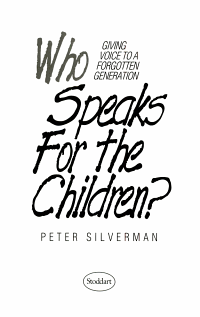 "What were my parents doing when they were as old as my son is today? What made them what they are today?" These questions are examined by the photographer Frederike Helwig in her book Kriegskinder (Children of War). People who were born in the late 1930s and early 1940s, who grew up during World War II, are now in their eighth decade of life. They look back, some of them speaking for the first time ever about what marked them: bombs, fleeing, fear, hunger, illness, death, missing fathers, overwhelmed mothers--as well as the speechlessness of the post-war era, when memories of the war and its intergenerational consequences were supposed to be forgotten. The forty-five haunting portraits--all of them taken recently with an analog camera--are contrasted with the narratives of childhood experiences told by eyewitnesses. This makes Kriegskinder a portrait of a generation whose memories will soon disappear with them.Exhibition: 2.2.-8.4.2018, f3 - freiraum für fotografie, Berlin

In Bits of Blue Taffeta: Remembering the Forgotten Generation, author Irene Aldrich brings readers a first-person account of growing up during the Great Depression and her experiences during World War II and in the years following. Throughout those tumultuous years, she and many others of her generation were still able to miraculously find joy in the midst of insurmountable obstacles--being exposed to poverty, deprivation, hunger, and discrimination and the horrendous accounts of some of the most heinous crimes against humanity imaginable. Despite these difficulties, however, she also witnessed incredible unity among members of the community and a level of patriotism that became unparalleled in history. Children were forced to grow up quickly as they withstood these rapid and extreme changes to their prior life experiences. After realizing the many changes in the world that were occurring at the time, she began to write her personal account as one member of that "forgotten" generation--with the hope that those born in later generations will gain further appreciation for the advantages and opportunities they've been privileged to have.

Jim had forgotten the Corps, but â€œa Marine is a Marine until he dies.â€ He was one of six hundred Oklahoma Marine reservists activated during the Korean War. When last Jim saw his best friend, Leon, each thought the other dead, killed by Chinese hordes at the Chosin Reservoir. Five decades later, Jim sees Leonâ€™s face in a crowd. Doubting his senses, he races toward Leon. Both are overcome on finding their dearest friend alive, after so many years. Each tells his story of survival in North Korea, and his life up to The Third Millennium. Their life stories teem with adventure, romance, and will to survive. The fire-team and the cooks from Camp Lejeune, N.C., and Gunny Hal, the rail-riding orphan who seeks to find lifeâ€™s meaning in death. They obeyed their orders, fought like hell, and came home to A Thunderous Silence.