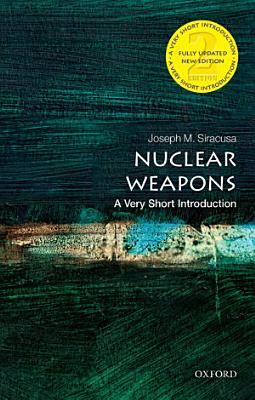 Despite not having been used in anger since Hiroshima and Nagasaki, the atomic bomb is still the biggest threat that faces us in the 21st century. As Bill Clinton's first secretary of defense, Les Aspin, aptly put it, "The Cold War is over, the Soviet Union is no more. But the post-Cold War world is decidedly not post-nuclear." For all the effort to reduce nuclear stockpiles to zero, it seems that the bomb is here to stay. This Very Short Introduction reveals why. The history and politics of the bomb are explained: from the technology of nuclear weapons, to the revolutionary implications of the H-bomb, and the politics of nuclear deterrence. The issues are set against a backdrop of the changing international landscape, from the early days of development through the Cold War. In this new edition, Joseph M. Siracusa includes a new concluding chapter, moving away from the emphasis of nuclear weapons in the "age of terrorism," to the significant lessons to be learnt from the history of the nuclear weapons era. Siracusa shows that because 21st century nuclear proliferation has deep roots in the past, an understanding of the lessons of this nuclear history is paramount for future global policies to be successful. ABOUT THE SERIES: The Very Short Introductions series from Oxford University Press contains hundreds of titles in almost every subject area. These pocket-sized books are the perfect way to get ahead in a new subject quickly. Our expert authors combine facts, analysis, perspective, new ideas, and enthusiasm to make interesting and challenging topics highly readable. 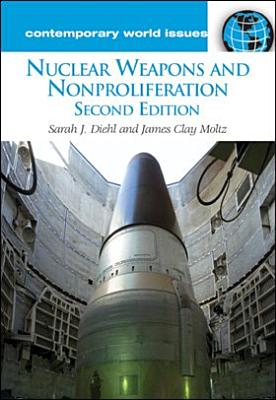 Provides an overview of the world's nuclear weapons, including histories of countries that have nuclear programs and biographies of individuals who have played a key role in nuclear weapon history. 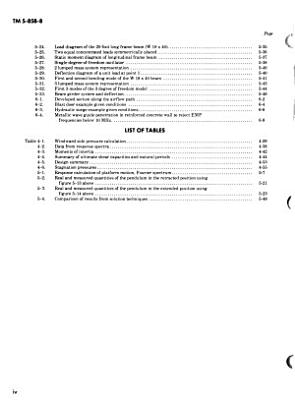 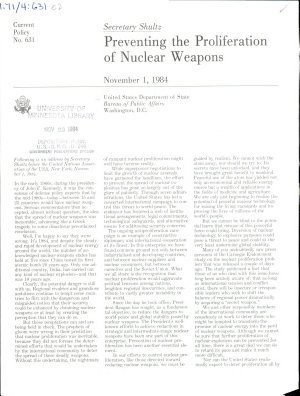 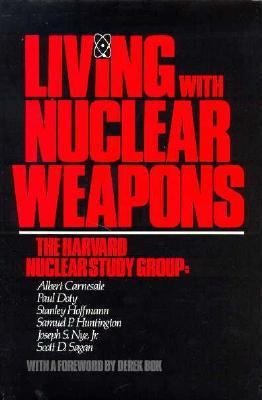 Describes the history of the nuclear arms race, examines the dangers of nuclear war, and discusses strategies for stopping the spread of nuclear weapons 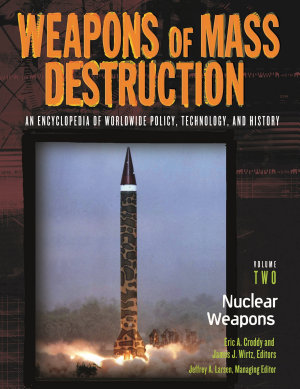 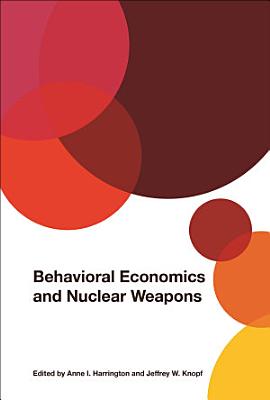 Recent discoveries in psychology and neuroscience have improved our understanding of why our decision making processes fail to match standard social science assumptions about rationality. As researchers such as Daniel Kahneman, Amos Tversky, and Richard Thaler have shown, people often depart in systematic ways from the predictions of the rational actor model of classic economic thought because of the influence of emotions, cognitive biases, an aversion to loss, and other strong motivations and values. These findings about the limits of rationality have formed the basis of behavioral economics, an approach that has attracted enormous attention in recent years. This collection of essays applies the insights of behavioral economics to the study of nuclear weapons policy. Behavioral economics gives us a more accurate picture of how people think and, as a consequence, of how they make decisions about whether to acquire or use nuclear arms. Such decisions are made in real-world circumstances in which rational calculations about cost and benefit are intertwined with complicated emotions and subject to human limitations. Strategies for pursuing nuclear deterrence and nonproliferation should therefore, argue the contributors, account for these dynamics in a systematic way. The contributors to this collection examine how a behavioral approach might inform our understanding of topics such as deterrence, economic sanctions, the nuclear nonproliferation regime, and U.S. domestic debates about ballistic missile defense. The essays also take note of the limitations of a behavioral approach for dealing with situations in which even a single deviation from the predictions of any model can have dire consequences. 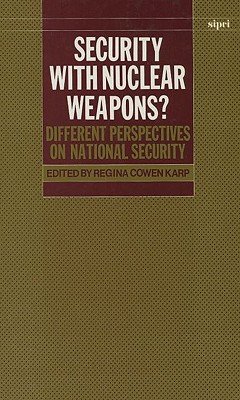 SIPRIStockholm International Peace Research Institute is an independent institute for scientific research, which aims to further an understanding of the conditions for peaceful solutions to international conflicts and for a stable peace. Over the past twenty years, SIPRI has concentrated on problems ofarmaments, disarmament, and arms regulation. SIPRI is financed mainly by the Swedish Parliament. Its staff, the Governing Board, and the Scientific Council are international.The prospect of large reductions of nuclear weapons poses fundamental questions about the purpose of nuclear weapons. Why have some states chosen to acquire nuclear weapons? How - and why - have these decisions been maintained over time? Why have some states elected to approach, but not cross, thenuclear threshold?This book examines the commonalities and differences in political approaches to nuclear weapons both within and among three groups of states: nuclear, non-nuclear, and threshold. The chapters explore the evolution of thinking about nuclear weapons and the role these weapons play in nationalsecurity planning.The book transcends traditional East-West approaches to analysis of nuclear issues by giving equal prominence to the issues of nuclear proliferation and non-nuclearism. The book also provides a comprehensive analysis of how current approaches to nuclear weapons have evolved both within and amongthe countries under study. 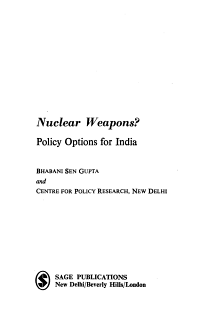 This is the first book to consider and spell out nuclear policy options for India. As a major contribution to the literature on nuclear proliferation, this pioneering and thought provoking work outlines the policy dilemmas and options with regard to nuclear weapons available to a country like India. Professor Sen Gupta outlines the options open to India as well as the external pressures on India to go nuclear -- the result is essential reading for anyone interested in the study of nuclear weapons, and policy makers in general. '...his incisive analysis of this subject of great misunderstanding is in itself an achievement of the first order. Anyone willing to examine the subject in depth will undoubtedly find this book invaluable.' -- Amrita Bazar Patrika, April 1984 'The book is factual, lucid and comprehensive...It is a book that outlines clearly the nuclear weapons policy options for India, which from the outset were its claims.' -- Teaching Politics, Vol 8 No3/4 '...coming as it does almost exactly a decade after India's first, and until now only nuclear explosion (1974), the volume constitutes a timely contribution to contemporary thinking on India's nuclear weapons policy...what this volume does bring out is the complexity and diversity of contemporary Indian thinking on the nuclear problem as it relates to the South Asian region.' -- Arms Control May 1984 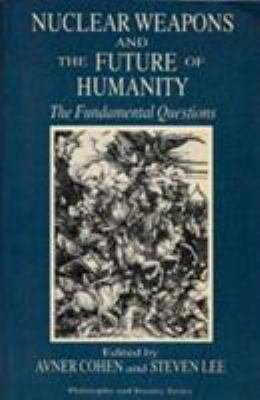 The excellent quality and depth of the various essays make [the book] an invaluable resource....It is likely to become essential reading in its field.--CHOICE 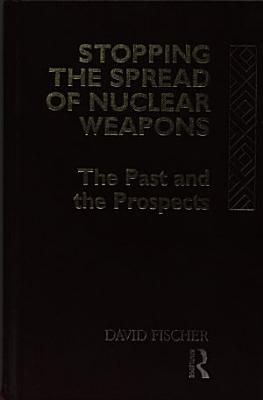 Fischer, who helped draft the original charter of the International Atomic Energy Agency (IAEA), provides a detailed historical account of current non-proliferation treaties and controls. He notes that originally the proliferation problem was how to permit the development of nuclear power (for cheap energy) without permitting countries to develop bombs; now the problem is how to prevent countries determined to build atomic bombs from acquiring the requisite technology. Many technologies (explosives, computers, nuclear energy) that are key to the development of nuclear weapons also have other legitimate applications. Fischer recommends reorienting the current non-proliferation regime, which is largely a Soviet-American invention, into one also supported by economic powers (the European Community and Japan); and that potential new nuclear states and "closet" nuclear powers be brought under broader IAEA controls. ISBN 0-415-00481-0: $66.95. 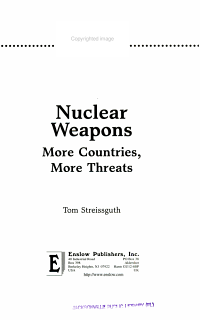 Traces the development of nuclear weapons, explains the different types, indicates the key countries in the nuclear arms race, and describes efforts taken to cease proliferation of such weapons. 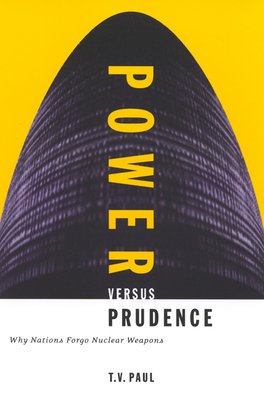 With the end of the Cold War, nuclear non-proliferation has emerged as a central issue in international security relations. While most existing works on nuclear proliferation deal with the question of nuclear acquisition, T.V. Paul explains why some states – over 185 at present – have decided to forswear nuclear weapons even when they have the technological capability or potential capability to develop them, and why some states already in possession of nuclear arms choose to dismantle them. In Power versus Prudence Paul develops a prudential-realist model, arguing that a nation's national nuclear choices depend on specific regional security contexts: the non-great power states most likely to forgo nuclear weapons are those in zones of low and moderate conflict, while nations likely to acquire such capability tend to be in zones of high conflict and engaged in protracted conflicts and enduring rivalries. He demonstrates that the choice to forbear acquiring nuclear weapons is also a function of the extent of security interdependence that states experience with other states, both allies and adversaries. He applies the comparative case study method to pairs of states with similar characteristics – Germany/Japan, Canada/Australia, Sweden/Switzerland, Argentina/Brazil – in addition to analysing the nuclear choices of South Africa, Ukraine, South Korea, India, Pakistan, and Israel. Paul concludes by questioning some of the prevailing supply side approaches to non-proliferation, offering an explication of the security variable and its linking of nuclear proliferation with protracted conflicts and enduring rivalries. Power versus Prudence will be of interest to students of international relations, policy-makers, policy analysts, and the informed public concerned with the questions of nuclear weapons, non-proliferation, and disarmament. T.V. Paul is an associate professor in the Department of Political Science, McGill University. He has published several books and numerous articles on international security and the politics of nuclear weapons, including Asymmetric Conflicts: War Initiation by Weaker Powers, The Absolute Weapon Revisited: Nuclear Arms and the Emerging International Order, and International Order and the Future of World Politics. 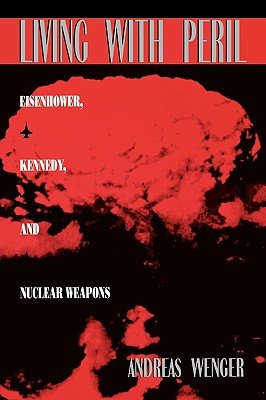 Living with Peril explains in detail how the Eisenhower and Kennedy administrations adapted to the reality of a Soviet nuclear force capable of destroying the United States and against which there was no effective defense. Wenger illuminates the development, implementation, and evolution of U.S. government policies designed to avoid war and to respond to the vulnerability of nuclear destruction. Drawing from a wealth of sources, Wenger provides an insightful and original perspective on the origins of cold war nuclear diplomacy. This is crucial reading for students and scholars of international relations, peace and conflict studies, and diplomatic history.